February Cherokee Chamber of Commerce Student of the Month

Congratulations to Braella Inman for being named the February Cherokee Chamber of Commerce Student of the Month! Braella is the daughter of Starlla and Robert Inman.

Her teachers appreciate Braella for her dedication to her classes and her outstanding kindness towards others. She is always willing to help and participates in class. After high school she would like to be an author or a doctor.

This month’s Healthy Hero Award winner is Taelyn Reuter. Taelyn is active in numerous sports including volleyball, softball, and is the basketball manager, to name a few. Taelyn is a pleasure to have in class. She does not hesitate to help her fellow classmates or staff. She is actively involved in whatever unit we are doing in Physical Education. Taelyn is a leader by example and tries her hardest no matter what she is doing. 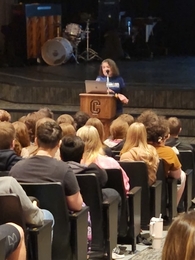 Retired high school counselor, coach and substitute teacher are just some of the incredible accomplishments of Deb Hankens. However Deb has also accomplished something that most people could only dream of. She competed in the Iron Man in Hawaii in October at the age of 71 years young. The faculty, staff and students had the pleasure of listening to Deb share her experience, on Wednesday during Empowerment time. This month’s theme is “fortitude” and we couldn’t think of a better speaker. Thank you, Deb Hankens for your inspiration, and being a role model for fortitude!

A key goal of high school students’ education is to ensure that students are FUTURE READY -with knowledge and skills to drive and navigate their careers and lives. Cherokee CSD wants to provide this education in meaningful ways. On Monday, January 16th, Washington High School held “Future Readiness Day” for students in grades 8-12.

The WHS faculty and staff would like to thank local businesses, WHS alumni, and WHS teachers who participated as presenters and speakers, for making Future Ready day a huge success. High School students participated in seminars and activities that inspired and educated them about the many opportunities the future has to offer them, many of which can be found right here in Cherokee. Students also took part in learning about their personality styles, durable (soft) skills activities, graduation requirements, scholarship opportunities, financial information, digital citizenship, employability skills, mindfulness activities and STEM breakout sessions, just to name a few.

An educational and fun day was enjoyed by all!

January Chamber of Commerce Student of the Month

Congratulations to Ty Schlicting for being selected as the January Cherokee Chamber of Commerce Student of the Month! Ty is the son of Andy and Jodi Schlicting. He stays active with football, track, basketball, wrestling, and shooting sports. His teachers appreciate Ty for his integrity, willingness to help others, and his positive attitude. After high school he is planning on going to the U.S. Naval academy and enlisting in the Marines.

Mrs. Anderson's College Human Anatomy and Physiology students recently dissected sheep brains and cow eyes as part of the nervous system unit. Students were surprised how small the sheep brains were and how big the cow eyes were. They were interested and engaged the entire class period as they identified different parts of the brain and eye.

DESCRIPTION OF WORK
NOTICE TO BIDDERS: Qualified bidders may submit bids for project as described in this
Document. All bids shall be in accordance with Contract Documents prepared by EDA Inc.,
which Contract Documents are made a part of this notice by reference thereto.

The project consists of replacement of the original interior
lighting fixtures and controls in the Cherokee Middle School.
All new replacement lighting fixtures will consist of energy
efficient LED technology. The new installations will comply
with the International Energy Conservation Code – IECC 2012.

TYPE OF BID
Construction Contract: Bids will be received for a single prime contract with the Owner.

BID OPENING TIME, DATE AND LOCATION
Owner will receive sealed lump sum bids until the bid time and date at the location given below.
Owner will consider bids prepared in compliance with the Instructions to Bidders issued by
Owner, and delivered as follows:

Bids will be publicly opened by the Owner and publicly read by the Owner or designee, on said
date and will be acted upon by the Owner at such later time and place as may then be fixed.
Award of the Contract shall be to the lowest responsive, responsible bidder determined on the
basis of the Base Bid. Neither the Owner nor its agents will assume liability for the inability of
the bidder to submit a bid in a timely manner. Bids received after the deadline will be rejected.
Bidders bear full and complete responsibility for the timely submission of such bid. Time of
receipt shall be the time recorded and determined by the Owner or designee.

ADVERTISEMENT FOR BIDS EDA No. 2256 00 11 13 - 2
All bids shall be filed on forms included in the Project Manual, furnished by the Engineer,
sealed and plainly marked. Any alteration of the bid form may be cause for rejection of the
proposal.

BID SECURITY
Each bid shall be made on the form furnished by the Engineer, and must be accompanied by
a deposit of money, Certified Check, Cashier's Check, or Credit Union Certified Share Draft,
or a Bid Bond to be executed by a corporation authorized to contract as a surety in the state
of Iowa, in an amount equal to five percent (5%) of the amount of the Bid, made payable to
Cherokee Community School District, Cherokee, Iowa, and may be cashed by the Board
as liquidated damages in the event the successful Bidder fails to enter into a Contract and file
bond satisfactory to the Board assuring the faithful fulfillment of the Contract and maintenance
of said improvements as required by law, the provisions of this notice and the Contract
Documents within ten (10) days after acceptance of his Bid.

State Sales Tax: This project is tax exempt. Do not include state sales tax in any calculation
of Bid totals. Contractor will be provided with Iowa sales tax exemption number for this project.

BIDDER QUALIFICATIONS
By virtue of statutory authority, preference will be given to products and provisions produced
within the State of Iowa, to the extent lawfully required under Iowa statutes.

The successful Bidder will be required to furnish a Performance Bond and Material and Labor
Payment Bond in an amount equal to one hundred percent (100%) of the Contract Sum, issued
by a responsible surety approved by the Board and shall guarantee the faithful performance
of the Contract and terms and conditions therein contained and the maintenance of said
improvements pursuant to the provisions of the Contract Documents.

Bids shall remain in effect for a period of thirty (30) days, commencing on bid due date.

The Board reserves the right to reject any or all bids, re-advertise for all bids and to waive any
or all formalities that may be in the best interest of Cherokee Community School District.

Monthly estimates will be paid to the Contractor as the work progresses in amounts equal to
ninety-five percent (95%) of the Contract value of the work completed during the preceding
calendar month. Such monthly payments shall in no way be construed as an act of acceptance
for any part of the work, partially or totally completed. Final payment of the five percent (5%)
retainage due to the Contractor will be made thirty (30) days after final acceptance of the work
under the Contract by the Owner if no claims are on file and after receipt of satisfactory
evidence that all claims pertaining to such Contract have been paid in full as provided in the
Contract Documents for said work.

Fabrication of new work shall begin immediately after contracts are signed and insurance
certificates are approved. Verify work schedule with Owner and Engineer. The complete
system shall be substantially complete by August 23, 2023.

NOTIFICATION
This Advertisement for Bids document is published upon order of the Board, Cherokee
Community School District.
By: Dr. Kimberly Lingenfelter, Superintendent & Equity Coordinator